Final Fantasy, a.k.a. FF1, is an NES RPG first published in Japan in 1987 and then in North America 3 years later.  I remember when I first played it as a kid at my friend Dave's house.  It blew my mind.  I would dream about Fighters and Red Mages and making the orbs shine again. 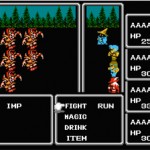 Recently, FF1 was released on the Wii Virtual Console and, even though I already owned it on my NES, I felt the urge to play the classic again without the fear of my NES crashing because I blinked too hard.

So I flipped on my Wii, downloaded the game, and played it for about 2-3 hours a night for a week (keep in mind I logged many, many hours playing this game as a child).  Here are my thoughts on the title.

Phil, what are you doing here?You're partied out, man. Again.

I liked having a customizable party.  There are 6 classes to choose from: 3 melee classes and 3 caster classes.  Since your party only consists of 4 characters, this means there's no way you can try them all out in one play through.  That increases re-playability, and it also allows you to tailor the party to your play style.  You also become more attached to your party because they're using the same 4 guys from start to finish.  They grow on you.

(Aside: I recently played FF2: The After Years and found it very annoying how often the characters changed.  Who cares if you level a character up if they're only there for two scenes of the game).

Unfortunately, and this may be due to size limitations of the platform, there's not a whole lot of in-game information to help you choose your party members.  What's the difference between a Thief and Black Belt?  Red Mage or Black Mage?  There's really no way to tell unless you go online and read up on the differences between the classes.  Not a huge deal considering it's an old game, but definitely something you'd have to take care of in a modern game.

What do you want me to do?  Kill him again?

With respect to combat, I also liked how there was no rollover attack if your target died.  Allow me to explain.  In FF1 combat, you have 4 party members, and 1 or more enemies.  Combat works in rounds, where each party member and enemy gets 1 attack in an randomly chosen order.  Now, if I get in a fight with two baddies, and make all my party members attack the first guy, and he dies on the first hit, everyone else who was supposed to attack that guy wastes their attack for that round (they just hit air).  That means that in dungeons, you really have to know how much your guys hit for on average, how often they hit, and roughly how many hit points the bad guys have.  As you get familiar with your party and the baddies, you start to get a feel of how you should distribute your attacks.  This makes the combat more interesting.

That being said, that particular combat feature is a little unintuitive.  I think most players would expect their attacks to rollover.  Indeed, in later FF games, this is how combat works.  However, I'm not so sure that the feature needs to be abandoned completely.  I feel that a hybrid system strike a nice balance.  Instead of making the regular attacks miss if the target is dead, I suggest having two types of attacks: regular attacks and focused attacks.  When using regular attacks, you would have a lower hit rate but your attack would rollover if the target dies before your turn comes.  When using a focused attack, you attack would be more likely to hit, but would not rollover if the target died.  The idea being that if a warrior positioned himself on the battlefield to attack multiple enemies, he would be in a suboptimal position for hitting each them individually.

Ships, canoes and airships.  Oh my.

I liked class changes.  In FF1, once you obtain the airship and complete a particular dungeon, you get a class change.  This changes the appearance of your character and allows them access to more weapons, armour and magic.  It's a nice thing to look forward to (akin to getting your level 40/50/60 talents in World of WarCraft) and gives you that second wind to keep playing until the end.

Another cool thing about class changes is that they're optional.  If you want to be hardcore, you can skip them and still beat the game.

What the hells the difference between RUB and XXXX or QAKE and ZAP!?

FF1 suffers from a problem that I feel is fairly common in many Square games.  There's just too many spells that do the same thing.  For example, RUB, XXXX, ZAP! and QAKE are all spells that will instantly kill an enemy or enemies.  Why would you have 4 spells that do that?  I feel like the game designers just gave up with the Level 7 and 8 spells.

What's better?  An Ice Sword or a Flame Sword?  Who can even use them?

My biggest issue with FF1 is that total lack of  in-game information.  The vendors do not tell you what the weapons, armour and spells do, or even who can use them.  I know the game came with a fold-out page that contained it, but come on, who keeps that stuff around?

FF1 is a wonderful game that has a surprisingly amount of depth and re-playability, especially for a game made over 20 years ago.  In fact, I feel like games like FF1 are a lost art, and have been unnecessarily abandoned for games that focus too much on CG cutscenes and not enough on gameplay.